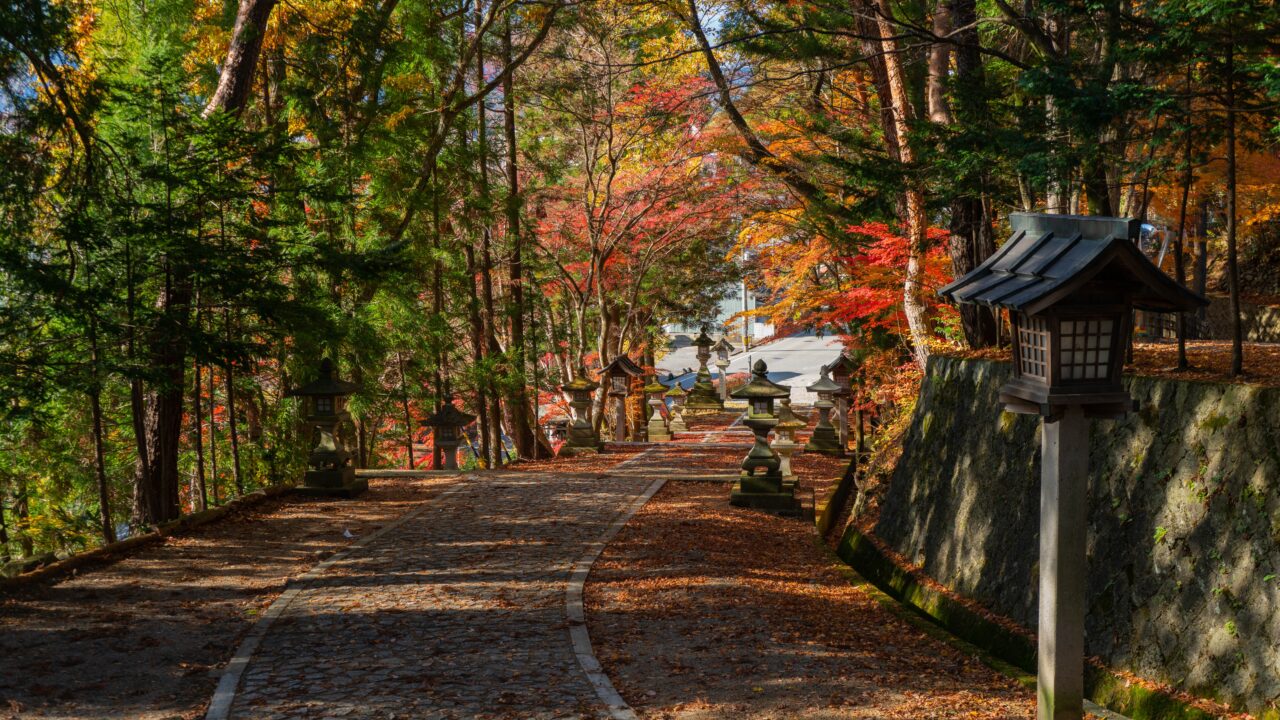 Russo-Japanese War is often spoken by Westerners when talking about historical circumstance in Meiji period. “Is it before or after the Russo-Japanese War?” they ask us from now and then.  In the Western world, Japan seems to have appeared on the historical stage due to the victory of the Russo-Japanese War. All the Japanese are supposed to be able to tell when the foreigner asked us about it. I think that this is the essential knowledge of Japanese history for those who want to be an interpreter guide in the future.

Takeo Hirose. A hero of the Russo-Japanese War who had no strangers in Japan until The World War 2. The famous song “Lieutenant Colonel Hirose” is the song that was sung by all Japanese people at the time. However, in the post war era, His name disappeared from public for being thought that he was a symbol of Japanese militarism along with Admiral Togo and General Nogi.

In the special TV drama “Clouds on the slope” which was broadcasted by HNK at the end of the year for three years in a row from 2009.  There was a line that mentioned to his grandmother in Taketa of Oita prefecture which was his  birthplace town.  But regret to say, Takayama city and Hida province where he actually spent his childhood did not appear at all.  Even though, in fact his grandmother, brothers, close relatives and friends lived in Takayama then. With that in mind, this time I will focus on Takeo Hirose’s boyhood in Hida Takayama.

The bust of Takeo Hirose in Takayama

Shiroyama Park is located on the site of Takayama Castle in feudal period, a small mountain in the center of Takayama City.  Going to the right in front of the entrance of the park and after passing Shorenji Temple on your left, you will find a small square “Chusa daira” or lieutenant colonel’s plain ground overlooking Takayama city. You will find the bust of Takeo Hirose. I’ve wanted to visit here for a long time, so I got this place with my wife.  While the beautiful fallen leaves were piled up, a local gentle man were taking a walk, and he spoke to me and kindly enough told me various stories relating to Hirose and Takayama.

To my surprise, This bust was built during the Russo-Japanese War, before the decisive battle with The Baltic Fleet in the open sea of Tsushima island. After visiting the Hida Gokoku Shrine（a split of Yasukuni Shrine) at the foot of Shiroyama Park, once upon a time, the drafted young men in the Hida area visited here to pray for victory in front of this bust before departure for the front.  However, this statue was also offered as material for munition during The World War 2. The current one was restored after the war.

On the other hand, Taketa City, Oita Prefecture, where he was born, has the magnificent “Hirose Shrine” and the museum commemorating him, but this is the only one in Takayama that reminds us Takeo Hirose. On the way back home , We stopped by Shiroyama Park and ate hodge-podge dish Oden while looking down the alpine city at dusk. 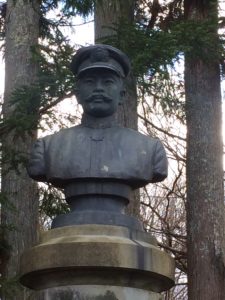 Taketa, in Oita his birth place

Takeo Hirose was born in Taketa City, Oita Prefecture in 1868. His father, Shigetake, was an Samurai subjected to Oka clan feudal lord. He was the person who had pro-Emperor’s thought, and after The Meiji Restoration he was granted a post as government official.  At the age of seven, Takeo lost his mother and was later educated in Bushido by his grandmother Chimako. It seems that the education received from Chimako had a great influence on his honest, bold and cheerful personality formation.

Lost house in the civil war and moved to Takayama

The town of Taketa was hit by the civil war during the Satsuma Rebellion in the 10th year of the Meiji period, and Hirose’s house was also destroyed in fire. The family had to move to Hida Takayama, where his father Shigetake was appointed as a judge in the regional court. Takeo was 10 years old.

Bereaved of his mother, losing his home in the wake of the civil war, and relying on his father, had to leave Taketa which is warm and accustomed to living, they had to travel to unfamiliar, distant cold region, Takayama. It was the trip taken by the robust grandmother, but what kind of thought did the little Takeo perceive at that time without railway or cars?

Takayama, As the second home

Then, He spent his boyhood here until he entered Kougyokusha school in Tokyo at the age of 17 with the aim of entering Naval Academy. Takayama is second home for Takeo.

Several years ago, I attended a seminar themed Takeo Hirose organized by the Takayama City Board of Education. One of the participants at that time said, “Takayama, in which Hirose spent a sensitive boyhood, must have had a great influence in terms of Hirose’s personality formation.” I quite agree to this opinion.

The residence of the Hirose family was located near the current Takayama Red Cross Hospital, right in front of Ipponsugi Hakusan Shrine.  Currently, it is a vacant space used as parking lot. Only does the stone monument built in 1935 remain. 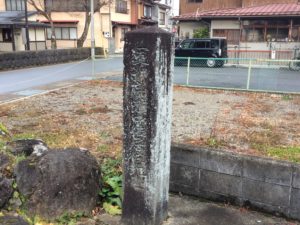 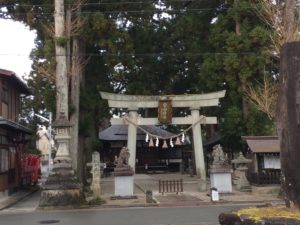 〈Ipponsugi Hakusan Shrine. Takeo used to play with his friends in a snowball fight in the precinct.〉

Hirose studied at Takayama’s Kansho School (currently Takayama City Higashi Elementary School. Hirose is registered as a graduate ).  After graduating he had been in teaching profession here for several months.

The Kansho School was a rare French-style building that was built shortly after Japan’s school system was established.  In 2004,  Takayama City Library “Koushokan” was built in the same location, almost completely imitating this Kansho school. 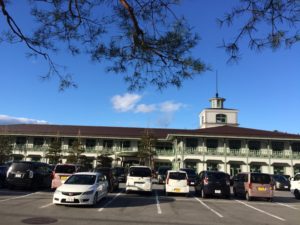 Judo and his first love?

Hirose later learned judo at The Kodokan in Tokyo and introduced it to Russia when he was dispatched as a military attaché in Russia. Many books have said that he would throw away the big Russian men and became a popular figure in aristocratic society of St.Petersburg.  Actually, he started practicing judo here in Takayama. We can read some anecdotes that say after practicing Judo, he would have lunch at the long-established restaurant “Susaki” with wearing judo garment. There is also an uncertain rumor that the young daughter of “Susaki” at that time was the first lover of clumsy guy Hirose.

Bookworm Takeo and his romance in Russia

It seems that he had been eager to read books and often witnessed reading books at home by his friends. When some friends of his invite him to play outdoors in winter, he used to answer “Now, I’m reading a book, so I can’t go with you.” Sometimes a friend who took advantage of Takeo’s character incited, “Takeo, you don’t wanna go out since you hate cold outdoor” Takeo usually got angry and jumped out to join the play.

His romance with Ariazna Kovaleskaya during his military attaché days is also well-known.  It is said that she was attracted to his samurai-like behavior and Hirose’s literary background.
It may be said that reading custom as a boy in Takayama formed such a tendency.

He was also a very orderly person and is said to have written 2000 letters and postcards throughout his life, most of which seem to exist now.

After he died in the Lushun Port (Port Arthur) blockage operation, he soon became a national hero. It must be certain that so many of his acquaintances were still alive, and those who had a letter from Hirose at home cherished them like heirloom.

At the above mentioned seminar held by Takayama City Board of Education, some participants brought postcards and letters from Hirose, which they keep carefully at their home. All of them were send to classmates, friends or acquaintances of Hirose. Their descendants brought and showed his letters and postcards which were sent from Russia.

He wrote “Russians sometimes boast of views of the Ural Mountains, but it’s not a big deal for me, since I viewed the landscape of the Northern Alps every day from Takayama.” I sympathize with him.

As his chums, friends and classmates also lived in Takayama and surrounding Hida area, while he was in Naval Academy, he all the way visited his classmates who worked for Kanaoke Elementary School at the neighboring town. Takeo also made it habit to run in Shiroyama every day for trainning. It was the basis of his strong-legs episodes and anecdotes at Naval Academy. It may have been cultivated during his boyhood in Takayama.

What attracts me most during Takeo’s life in Takayama is about the painful separation from Takeo’s father, Shigetake for being transferred to Gifu.

It was an early Meiji period (1880’s) when there were no railway or cars. Takeo accompanied his father to see him off at Kosaka on the way for Gero along with the Kago (palanquin) in which his father rode. However, maybe it was quite hard for him to give up even after parting from his father at Kosaka, He followed his father’s Kago with keeping a distance.

After a while, Takeo cried and pleaded with father, requesting to take him to Gifu with him. However, Shigetake enthusiastically talked his son into staying in Takayama for his grandmother and brothers. His father was in tears and his son as well.

The distance between Takayama and Kosaka is about 30 kilometers. Having parted his father, Takeo trod heavily on the way home going up and down the Miyatouge（Miya ridge) a little before Takayama, and returned to home, cried on the open corridor without worring about the eyes.

Having parted his mother at the age of 7, spending the childhood period with absent father, finally being able to live together for a short while, and farewell to his father again. After that, When he parted with his lover Ariazna in Russia, Takeo supposed to be always lonely and comfortless. It’s only my imagination.

Died in the operation outside Port Arthur

After setting up the explosive, Takeo returned to the cargo ship Fukui Maru to search for missing Sergeant Sugino in the Port Arthur blockage operation. It was probably a similar feeling in his chest, and he might have had to take such an action.

In the TV drama “Saka no Ue no Kumo (Clouds on the slope) “, there was a scene in which his best friend, Masahiro Motoki (Mokkun), who played the role of Saneyuki Akiyama, returned to his private room in the battleship “Mikasa” and sobbed after receiving the news of the death of Takeo Hirose.

Jigoro Kano (the founder of Judo) at the Kodokan, who heard the news of Hirose’s death was said to cry without any notice.

Ariazna was said to have been in mourning for a while after receiving the news of Hirose’s death.

Together with the three people who informed the end of Hirose, the scene where the boy Takeo parted with his father and then cried at Takayama’s house made me feel pity. 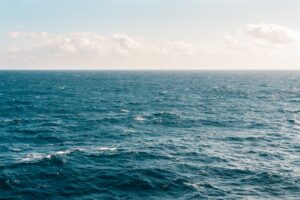 As many books and dramas have described the situation after Takeo Hirose left Takayama and the final circumstances outside Port Arthur, so I will not talk about it in detail. Let me put up the lyrics of the song “Lieutenant Colonel Hirose” expressing the scene best, so I would post it below as it is.

♬
Roaring cannon sound, flying bullets
Rough waves on the washing deck
Lieutenant Colonel’s cry through the darkness
“Where is Sugino?  Where are you?”

Three times to search all over the ship
He can’t hear answer,  can’t find Sugino
The ship gradually sinks in the waves
Shelling gets harder around him

That is all.
Thank you so much for reading. 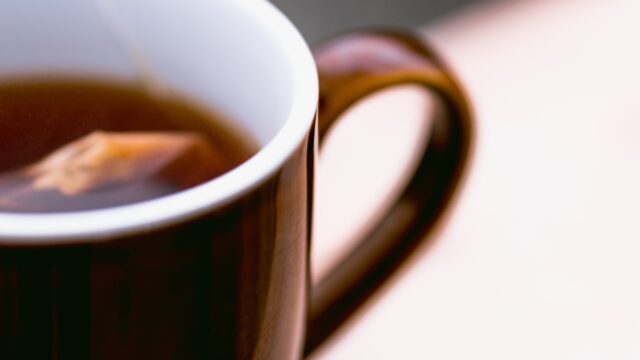 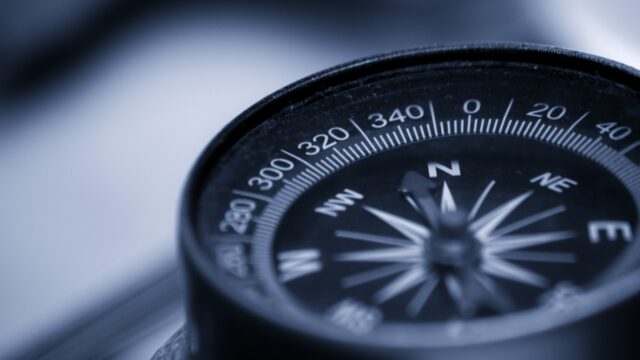 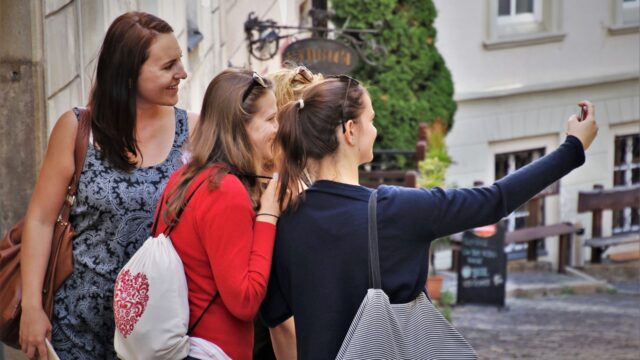 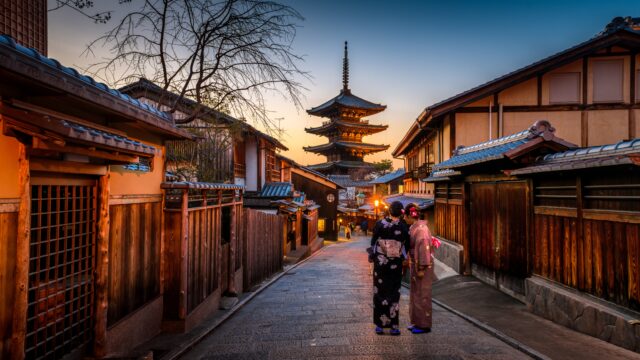 "The Makioka sisters" Tanizaki's masterpiece. It is gorgeous but sad story.

harbinger0124@gmail.com
英語に再挑戦
"The Makioka sisters" This worldly famous novel has been made into mov … 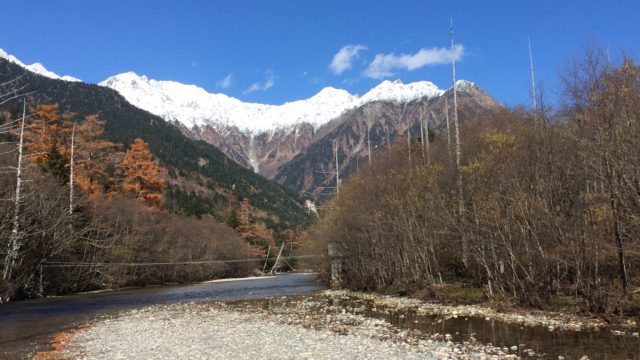 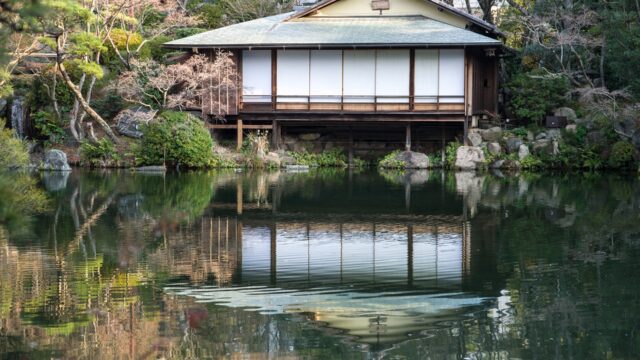 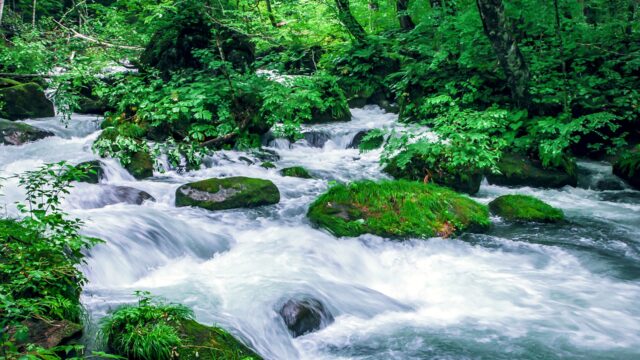 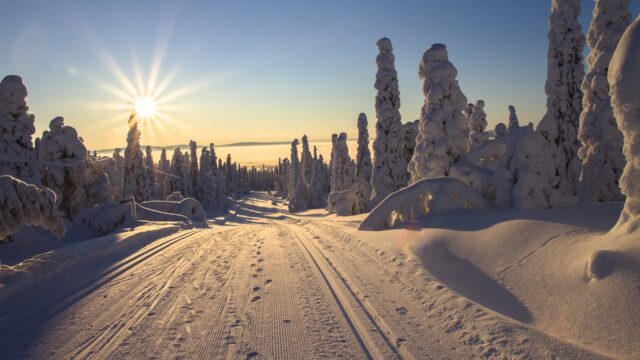 To Kamikochi in late autumn with an American guest

harbinger0124@gmail.com
英語に再挑戦
“I definitely have wanted to come here.” As expected by an American  … 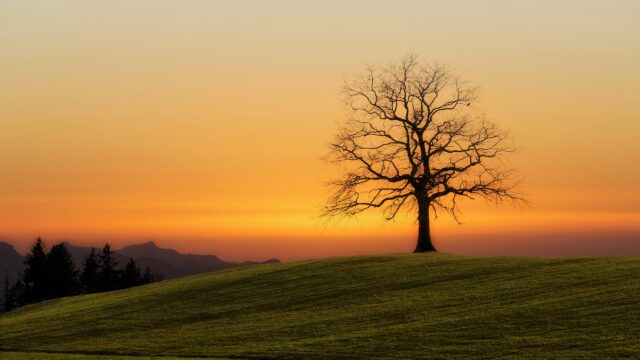 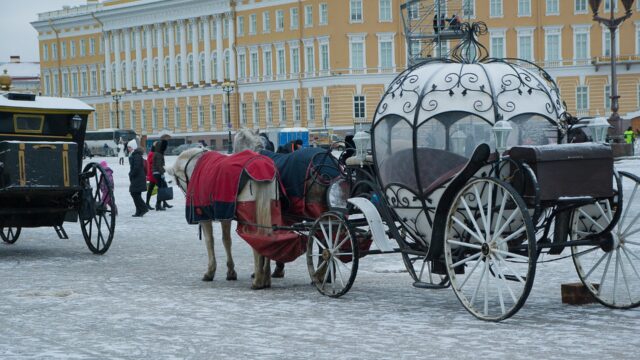 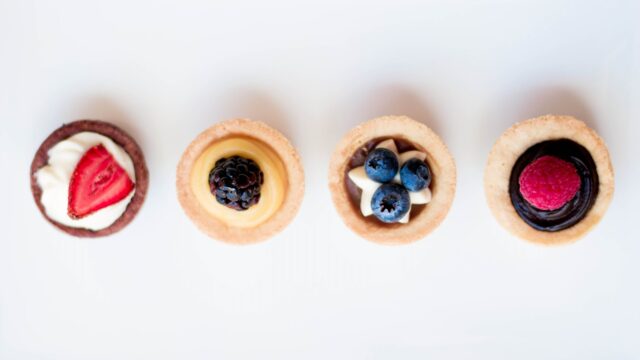 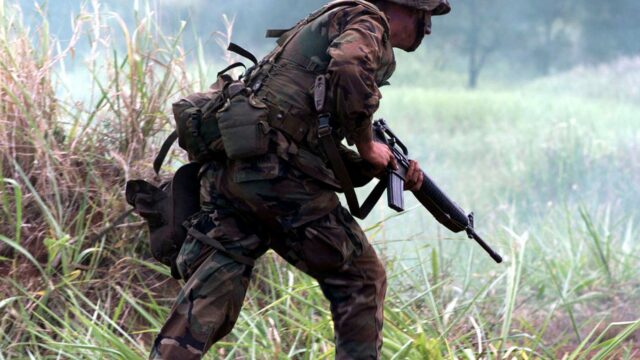 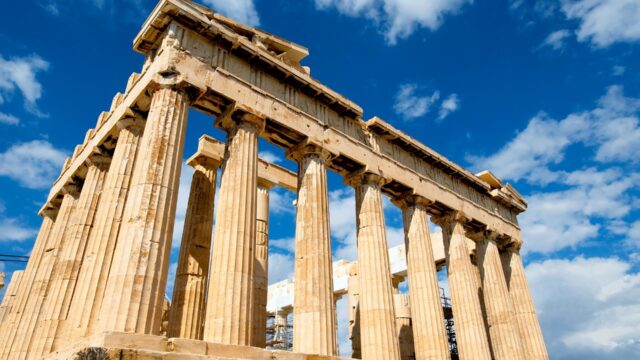 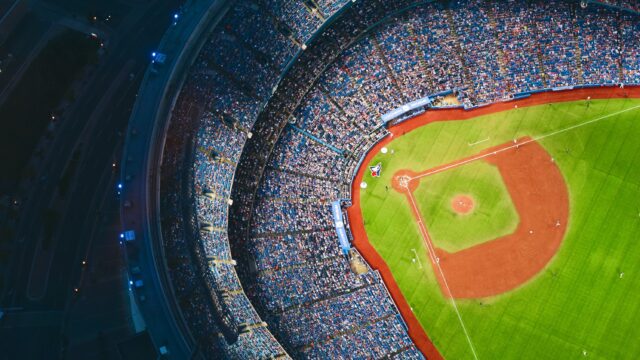